Getting Rid of Japanese Beetles

Getting Rid of Japanese Beetles 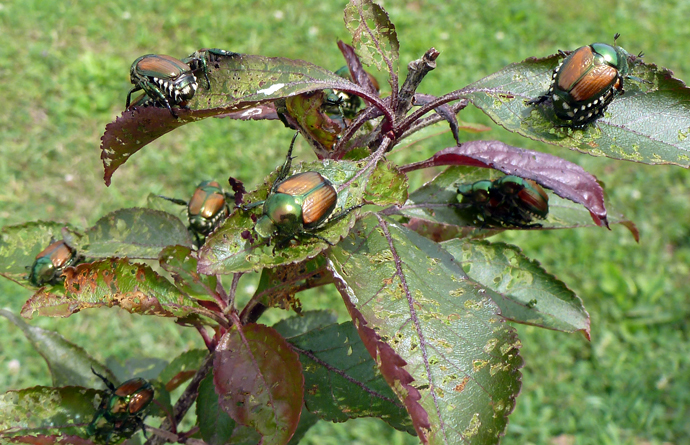 Dont ya just hate em??? Japanese Beetles have been a nuisance in America since 1916. Thought to be imported as grubs in a shipment of iris bulbs from Japan 5 to 6 years prior, it was soon realized that Japanese Beetles were a serious threat to agriculture in just one year of discovering the species.

In Japan, the beetle isnt harmful. Its natural predators keep the population under control. But here in America, the invasion has spread to most states east of the Mississippi and the effects can be devastating.

That’s not hard to believe considering their mating cycle. It only takes two days for adult beetles to feed and mate before the female lays more eggs. She’ll lay up to 5 eggs and will repeat the cycle until up to 60 eggs are laid. for each female.

Though efforts to eradicate the species were given up in 1920, there are things you can do to keep things under control and save your plants!

Milky Spore.
For smaller lawns, the addition of milky spore will kill grubs. It takes a few years to incorporate into the lawn but its said to be very effective. Thats great for keeping the population down. If you can kill a bunch, go for it! but what about your neighbors lawn? What about forest areas closeby? The beetles will travel to feed and you’ll still need to take other precautions.

Bag a Bug.
I dont care what ANYONE SAYS about this product, it’s saved my plants for years. For $5 each kit at the hardware store, assemble a plastic frame, lure and bag trap, then hang them all over your yard. It’s extremely effective at catching beetles. Empty the bags often, dead bugs tend to smell. (my neighbor empties the bags in the fire pit as soon as they’re all dead, and hangs the bag back up)

The major complaint is that the bag a bug trap attracts more beetles to your yard. My rebuttal… ‘bring em on!’ Yes it may attract even more beetles from other areas, but they go IN the bag. It’s a dream of mine to distribute 2 bags to every home in the neighborhood every year. Get em all until theyre eradicated!

Insecticide.
This year the beetles were so bad they outnumbered my bags, so I needed quick protection! There are a few insecticides that are effective at getting rid of beetles. Make sure the label clearly shows that its specifically for japanese beetles, and to keep costs down, buy a concentrated liquid to mix with water in a spray bottle.

Non Attractive Plants.
If you just cant bring yourself to kill bugs, or are hardcore organic, theres still another choice. Ohio State University published a list of plants that Japanese Beetles dont like to feed on. There are enough plants listed here to still have a beautiful garden, and not have a bug problem… doesnt it give you a warm and fuzzy feeling?