How To Make A Fairy Door. Fun 15 Minute Project.

Fairy doors are such quick easy projects you can do with your kids. Making fairy doors is very satisfying and doesn’t take much time or effort at all. And they’re so much fun! You can get really creative with this. Here are the instructions in a nutshell.

I was so impressed with how great popsicle stick fairy doors look, I had to try it myself.

I gathered stuff from around the house… found the old popsicle sticks, raided the sewing tins and junk drawers for buttons, thumbtacks, jewelry. A ‘fairy door shoebox’ filled with tools and goodies, quickly became a necessity.

I started with Gorilla Wood glue, with hopes that they will hold up to water outdoors and in fairy garden containers. Its rated indoor/outdoor use with Type2 water resistance, but what I like about this glue is that it sets quickly and there’s no foam like with regular gorilla glue.

UPDATE: Gorilla wood glue is the perfect glue for wood projects to be kept outdoors. I left them out all winter to be sure they would survive the elements. And they DID! Now i don’t recommend leaving them outside all winter, because they get quite dirty. I wanted to test the extremes and this glue won.

How to Make a Fairy Door: Construction

Making a fairy door is a rather straightforward process. Lay popsicle sticks out to create the design you want. Cut two cross pieces to hold it all together and glue. I used a box cutter to cut the pieces. You probably can get away with a good pair of scissors.

Pick out cool buttons, charms from old jewelry, fake moss from the dollar store, and glue it on. I used wood stain on some, paint on others and left some bare wood.

Here are the first two. To get the button to lay flat, I cut a small hole in the stick with an exacto knife and glued the button in. 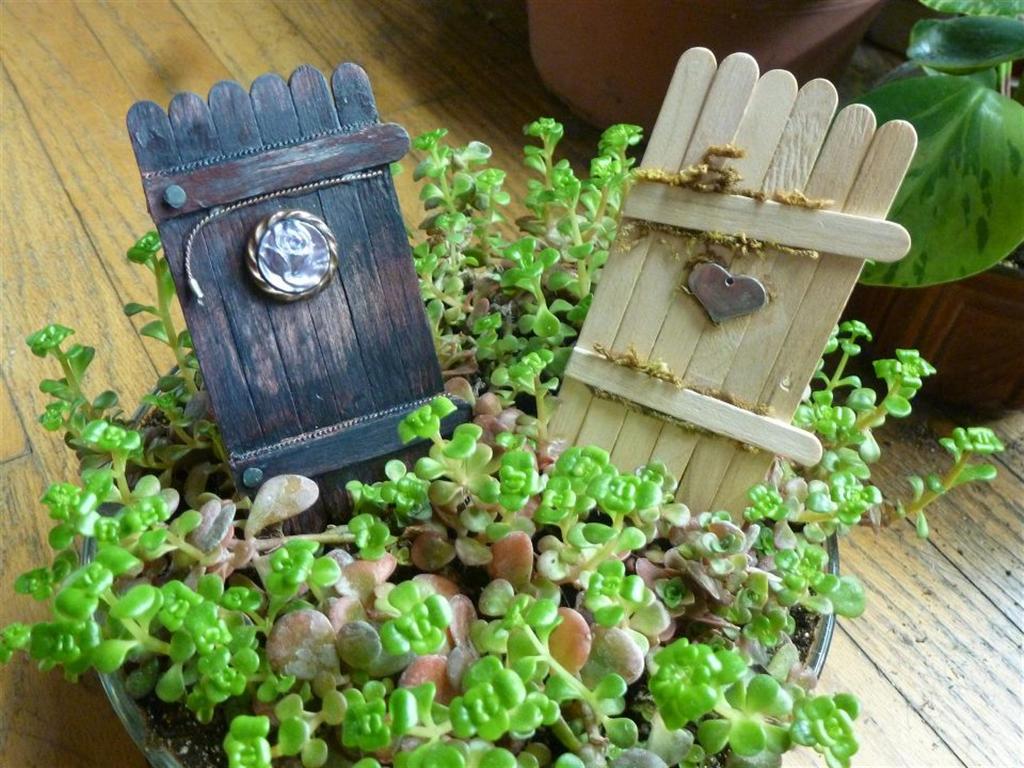 Add some color! I have a thing for red doors. After posting this picture on facebook, I learned some fascinating things about red doors. “Feng shui says that they are good luck.” “In China, it’s tradition to paint the front door red before the new year, to invite good luck and happiness.” “In Catholicism, the red door on a chapel symbolized the blood of christ to signify that the ground inside the church was holy, and a sanctuary from physical and spiritual evils.” “In Ireland, front doors are painted red to ward-off ghosts and evil spirits.”  I had no idea! 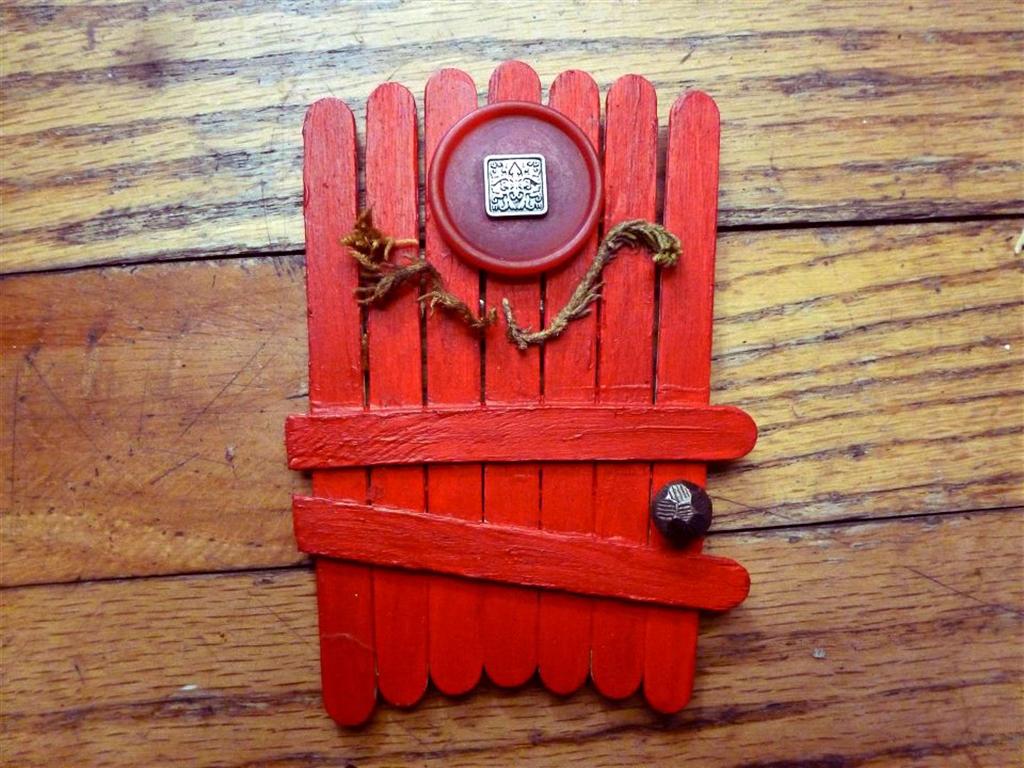 So I kept going, loving every minute of it. Honestly, they go so quick you can make a half dozen fairy garden doors in no time. Its fun to see projects come to fruition in so little time, and turn out super cute even for a beginner! 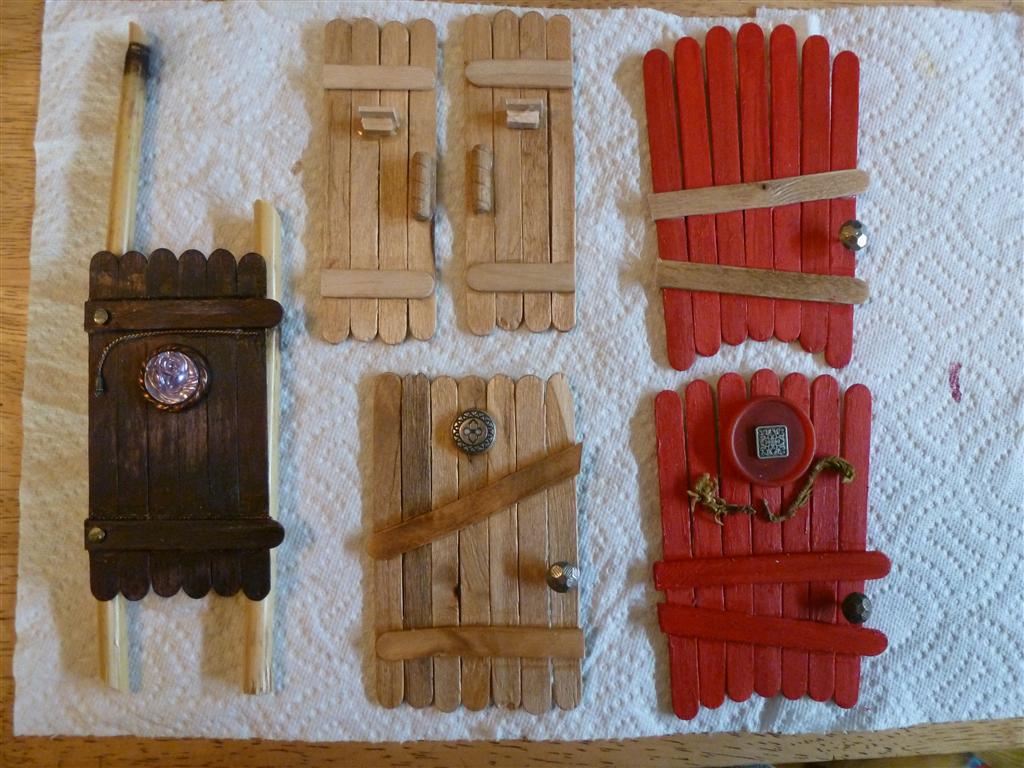 At this point, I had a question. How do you get these things to stand up? Most fairy doors I’d seen were attached to a tree, but I wanted to put them in containers. So I did some searching and I found the most impressive fairy garden doors Ive ever seen. It’s elaborate and breathtaking with a ton of little details to look at. 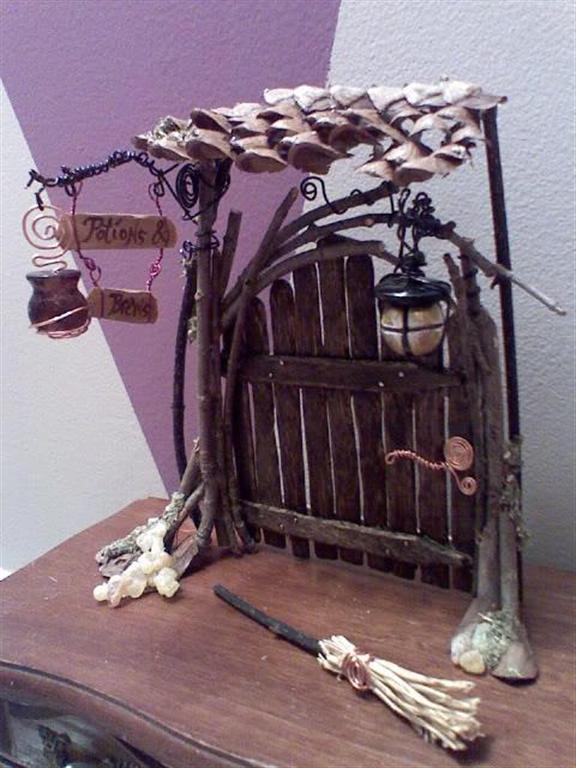 I was inspired to say the least! Since I had my hole boring drill bit out to build our hoop house cold frame (and i didn’t have to go outside in 20 degree weather to get it) I wanted to attach the doors to branches. Which I also had inside. Dont ask.

So I drilled holes in a base of scrap wood, or torn branch. Filled the holes with glue. Stuck in some broken branches…and voila! This is what I came up with.